Chris began Yoga in 1987, and working individually with Paul Harvey in 1989. He travelled to India to stay at the Krishnamacharya Yoga Mandiram in 1989/1990 and studied Yoga therapy with Dr Latha Satish and chanting with L.V.Sujaya.
Chris continued his studies with Paul over a long period, through individual lessons, the practitioner and postgraduate programs, and working with Desikachar in India and the UK under Paul’s guidance.
Soon after encountering yoga, he started practicing Zen and received ordination in the Soto Zen lineage from Jean Shogen Baby in 1992.

He is very interested in the relationship between Yoga and Buddhism, and the role of practice in twenty first century life, and furthermore, draws inspiration from an ongoing relationship with his Zen teacher Mokuho Guy Mercier, sustained contact with his peers (particularly Ranju Roy), and with teachers such as Sheela Shankar and Sriram. 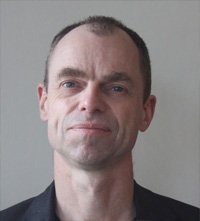